Hello world … it’s the last week of summer break and we are well past due for an update on things going on in the UA Lab!

During the winter and spring we had a flurry of published papers by members of the group:

Graduate student Sabrina Chee published a paper in the Journal of Physical Chemistry about nanoparticles formed from reactions of nitric acid with dimethylamine. That paper combines direct size-resolved chemical composition measurements of formed particles and some nifty modeling by Nanna that helps to explain our observations:
https://pubs.acs.org/doi/10.1021/acs.jpca.9b03326

Graduate student Danielle Draper published a paper in the special issue of ACS Earth and Space Chemistry “New Advances in Organic Aerosol Chemistry” looking at the oxidation of delta-carene by nitrate radical. This is the first to emerge from our collaboration with Dr. Theo Kurten at the Univ. of Helsinki and Prof. Henrik Kjaergaard at the Univ. of Copenhagen:
https://pubs.acs.org/doi/abs/10.1021/acsearthspacechem.9b00143

Graduate student Hayley Glicker published a paper on our measurements of nanoparticle composition in the Amazon Rainforest of Brazil during the GoAmazon 2014/5 campaign. Hayley points out the importance of biogenic compounds in nanoparticle formation but also identified a major constituent as a nitrogen-containing organic that we hypothesize to be isocyanic acid. It’s still a bit of a mystery as to why it’s found in such small particles (at the time of this writing this link leads to a pre-print … the final version is accepted for publication):
https://www.atmos-chem-phys-discuss.net/acp-2019-299/

During the summer we received news from the National Science Foundation that our proposal for the purchase of a ultrahigh resolution mass spectrometer was been awarded. For the curious,  we will receive a Thermo Vanquish UHPLC + Q-Exactive Plus Orbitrap mass spectrometer. It will arrive in the fall.

Nanna Myllys received the 2019 Early Career Scientist Aerosologist award from the Nordic Society for Aerosol Research (NOSA), in recognition of her amazing work as a postdoc in our group and as a graduate student at the Univ. of Helsinki. This was conferred during the European Aerosol Conference in Gothenburg, Sweden. At the start of the summer, Mike Lawler, Hayley Glicker and Sabrina Chee went down to the Hydraulics Laboratory at the Scripps Institution of Oceanography in San Diego to participate in a huge laboratory study called SeaSCAPE (Sea Spray Chemistry And Particle Evolution). These experiments replicated natural sea spray aerosol in a controlled setting, allowing for detailed fundamental studies of aerosol reactions. Look for more updates on this study to come.

In July we hosted Reed College Prof. Julie Fry and her students, Andrey and Emily, for experiments in our chamber lab on new particle formation and growth from nitrate radical initiated oxidation of various monoterpenes. Here are some action shots from the lab: A larger group of undergrads from Reed came for a 2-day visit to learn about life as a grad student at UCI. Their visit included a roundtable discussion with UCI chemistry graduate students. Here are some shots from that event: The UA Group hosted an AirUCI workshop on Aerosol Dynamics, taught by Pete McMurry. The workshop took place over 3 days at the James San Jacinto Mountains Reserve near Idyllwild, CA. During the workshop the group learned how to use a sectional code for calculating the time-dependent evolution of an aerosol particle size distribution. It was a lot of fun and we hope to have a chance to organize additional workshops in the near future! 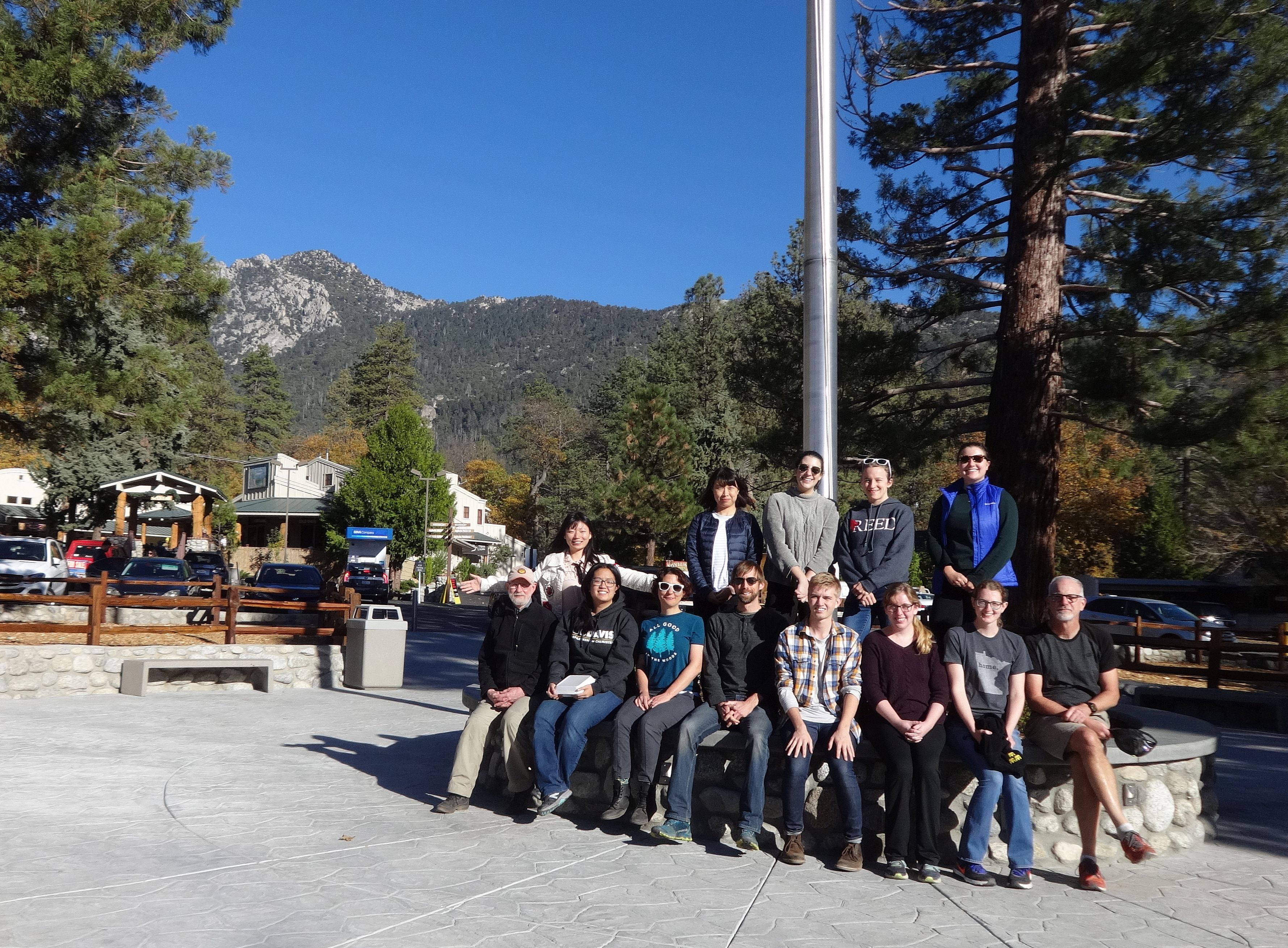 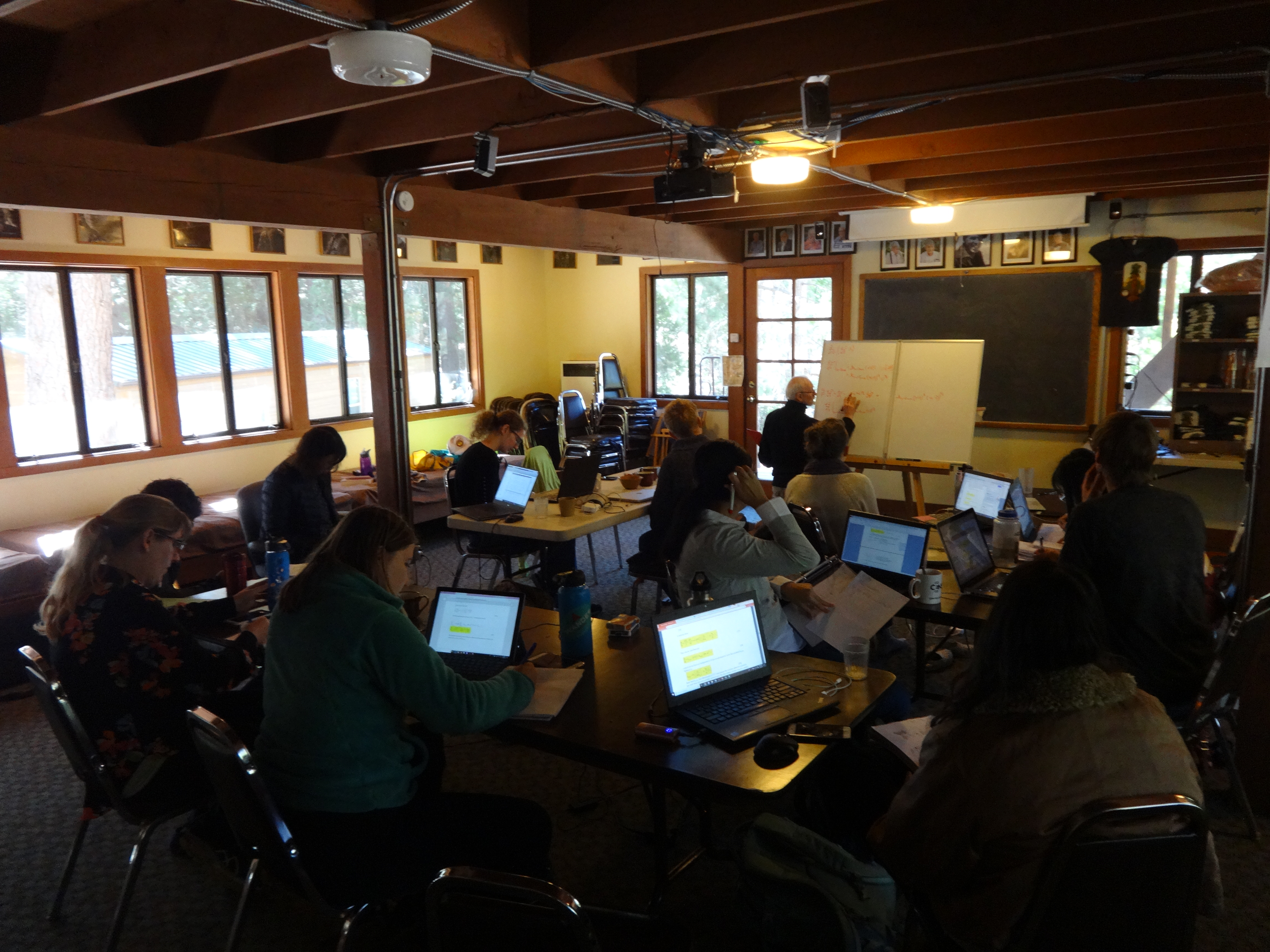 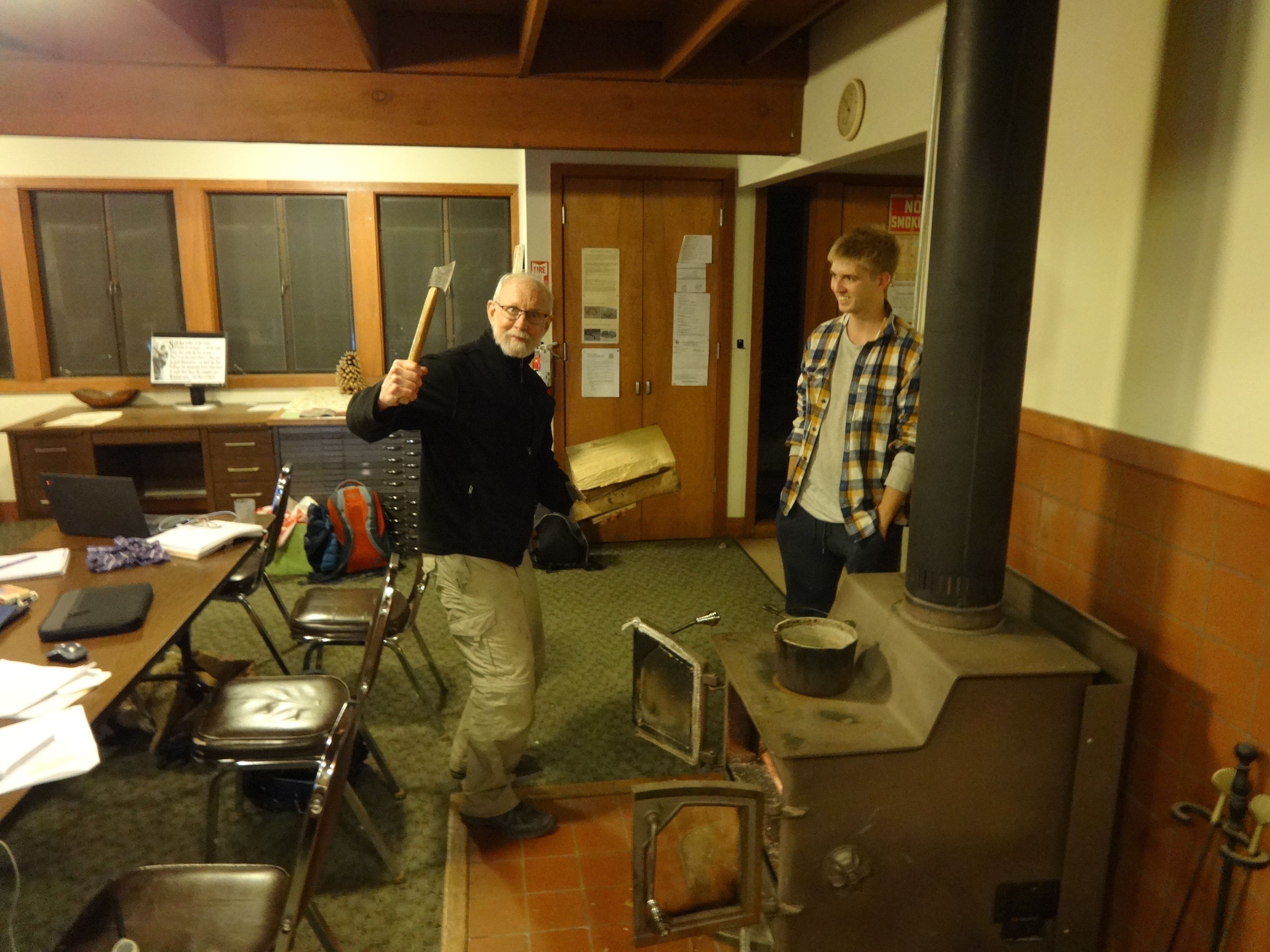 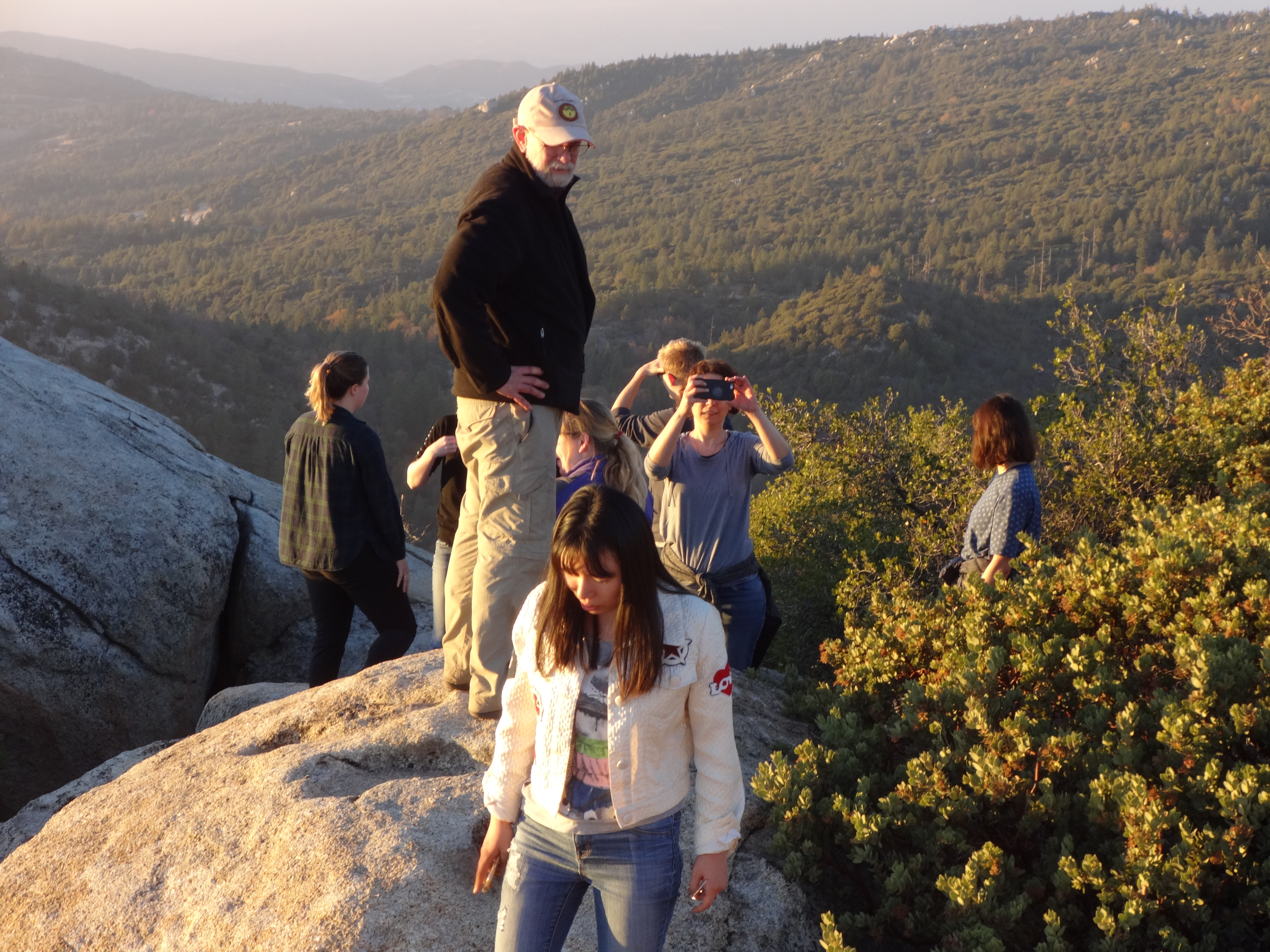 At the top of the 4 saints trail 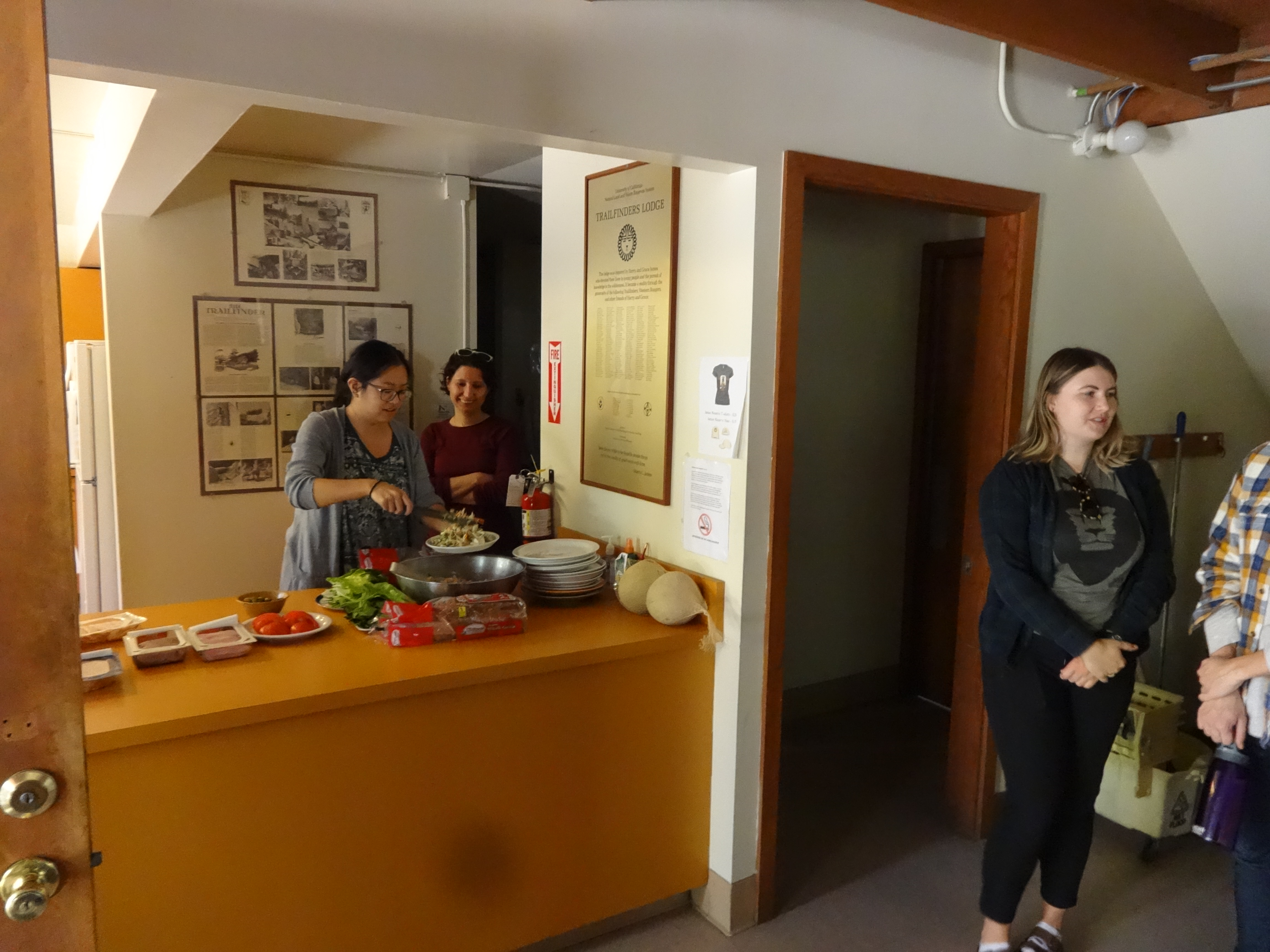 It’s time for an update on research and group life! For random pics posted from the group, please see our photo page.

First, Deanna Myers joined the group at the start of the summer! Deanna is a graduate of Western Washington Univ. Deanna will be studying the uptake of water into atmospheric nanoparticles. We also welcomed a new postdoc in the group … Dr. Nanna Myllys. Nanna is a recent graduate from Prof. Hanna Vehkamaki’s research group in the Physics Department at the Univ. of Helsinki. Nanna is a computational chemist, and will work with our group in collaboration with Prof. Benny Gerber’s group here at UCI studying the chemical mechanisms that lead to nanoparticle formation.

Just last week, Jim, Hayley, Danielle, and Xiaoxiao attended the International Aerosol Conference in St. Louis, MO.  Xiaoxiao’s poster was about the liquid water content of aerosol particles in Beijing, China, and Hayley’s poster was about the composition of ultrafine particles in the Amazon basin of Brazil. Xiaoxiao also gave an excellent talk at the meeting on her recent research here at UCI on the role of water vapor on the formation of highly oxidized organic vapors. Here are some action shots from the poster session … Classes ended a month ago and now we have warm days and a more relaxed schedule. This doesn’t mean things have slowed down, however. Two papers from the group were recently accepted for publication in an upcoming special issue of Aerosol Science and Technology that will honor Pete McMurry. For those of you who don’t know Pete, he’s an extraordinary aerosol scientist and bicyclist who recently retired from full-time professoring … but not from biking as evident by this pic of his Oregon – Minnesota tour last summer:

Pete taking a break in Montana during his Portland – Minneapolis tour.

The following two papers were accepted for publication:

“Water-Condensation Based Nano-Particle Charging System: Physical and Chemical Characterization,” Nathan Kreisberg, Steven Spielman, Susanne Hering, Danielle C. Draper, Michael J. Lawler, and James N. Smith, Aerosol Science and Technology, in press. This paper describes a water-condensation based system that we developed with Aerosol Dynamics, Inc., to enhance both the charging efficiency and the concentration of sub-20 nm particles for TDCIMS. We call the instrument “Stanley” because it’s made entirely out of stainless steel. Experiments with TDCIMS shows minor contamination of sampled nanoparticles as a result of this charging mechanism.

“Size Resolved Chemical Composition of Nanoparticles from Reactions of Sulfuric Acid with Ammonia and Dimethylamine,” Haihan Chen, Sabrina Chee, Michael J. Lawler, Kelley C. Barsanti, Bryan M. Wong, and James N. Smith, Aerosol Science and Technology, in press. This paper investigates nanoparticle formation and growth driven by acid-base chemistry from sulfuric acid (H2SO4) with ammonia (NH3) or dimethylamine (DMA). In these experiments with a flow tube we observed that the smallest (sub-10 nm diameter) particles were more acidic than bulk thermodynamics predicts, but that as particles grow to ~30 nm they become less acid. Modeling performed by our colleagues at UC Riverside show that, as particles decrease in size, the acids become “less acidic” and bases become “less basic.” We are still exploring the exact reasons for this behavior. The boreal forest near Hyytiälä, Finland

A new article was just published by the group, with lead-author Mike Lawler and collaborators at the University of Helsinki,  in the journal Geophysical Research Letters.  The article explores the sources that influence the growth of newly formed atmospheric particles over the remote boreal forest. Measurements of nanoparticle composition made in Hyytiälä, Finland during the 2014 Biogenic Aerosols—Effects on Clouds and Climate (BAECC) campaign show evidence that organic and sulfur-containing compounds derived from marine processes may contribute to the growth of particles to a similar degree as oxidized products of terpenoid compounds emitted from trees.

Happy New Year everyone! It seems the fall has flown by. Here are some of the highlights for the Ultrafine Aerosol Group.

At the end of the summer we said farewell to our awesome summer research undergrads with a bonfire and dinner on the beach. During the summer, Irmak Sengur (senior, UCI Chemistry) worked with Mike to analyze particle samples collected during the North Atlantic Aerosols and Marine Ecosystems Study (NAAMES). Hannah Medina (sophomore, UCI Chemistry) oversaw the operation of our particle size distribution instrument, for which we will soon provide real-time data on our webpage. Justin Min (UC Riverside, B.S., Chemistry and Environmental Science), worked on some new instrument development projects for analyzing the composition of ultrafine aerosol particles. We also welcomed a new visiting graduate student to the group. Xiaoxiao Li is a 3rd year PhD student from the research group of Prof. Jingkun Jiang at Tsinghua University in Beijing, China. Xiaoxiao is already making herself indispensable on some instrument development projects for measuring trace gases and nanoparticles. We will enjoy working with her over the coming year!

We closed out the year with some great papers, including the first to feature research that was initiated here at UCI (zot! zot! zot!). In this study we found that new particles that form in the atmosphere can do so high above-ground before such events are observed by ground-based instruments. Once formed, these particles can take up significant amounts of water and become more liquid-like, which can impact the role that these particles play in atmospheric chemistry and cloud formation processes.

A complete list of papers can be found on our web page. Here are some more recent highlights:

New research projects started in the fall, the result of recently funded proposals:

Have a wonderful 2018 everyone!

Research and Teaching in the Amazon Rainforest

Jim and Hayley just returned from a teaching and research visit to the Federal University of Western Pará in Santarem, Brazil. We have been sampling ultrafine particles in the rainforest here for the past year. Here is a slideshow with some highlights from the visit. Among other things, we held a short course on “Introduction to Atmospheric Aerosol and Volatile Organic Compounds Measurements” on a river boat on the Tapajos River.  Here’s a link to an article about our visit from the UFOPA website (along with exciting interviews of Jim and Hayley).  It’s in Portuguese but Google does a pretty good job of translating it.

Danielle is awarded a GROW grant!

Danielle Draper, a third-year graduate student in the group, was just awarded a Graduate Research Opportunities Worldwide (GROW) grant from the National Science Foundation. GROW provides current awardees of the NSF Graduate Research Fellowship Program travel funding for international research collaboration. She will use her GROW funds to collaborate with Theo Kurten and colleagues at the University of Helsinki. Yay, Danielle!

We celebrated our new lab with a lab-warming party.

Theme by Anders Noren — Up ↑