This is the Start of the Planet of the Apes

Posted on December 24, 2016 by Dennis SILVERMAN

This is the Start of the Planet of the Apes

I don’t really mean apes, but a government with similarities to that in the Planet of the Apes movie. I don’t really remember many of the details, so movie buffs, please don’t take me to task. This starts with remembering the dramatic scene where Charlton Heston first realizes that he is on earth, where he sees the Statue of Liberty half buried in the sand. The thing that just struck me about that, was that the sea level had risen to halfway up the statue, and had deposited the sand around it. This movie first came out in 1968. We are now beginning a dramatically different era where the Trump cabinet consists of very carefully chosen climate science deniers, who have designed their careers around destroying the embedded government regulations and plans for clean energy, and the study of climate science, which strongly justifies clean energy plans. Trump and the administration are going to destroy the amazing planet-wide Paris agreement, just put into action, that involves action by 200 countries. The Republican House, Senate, and the next Supreme Court appointments are climate deniers, and the relevant CongressIonal committees are all led by the most egregious ones. Also, it is probably very warm in the New York area where the movie takes place, since the humans seem comfortable with very little clothing on. (It seems odd that with his human girlfriend and horse, Heston had not realized that he must be on earth.) Let’s move on to the apes’ Minister of Science, and also Chief Defender of the Faith, Dr. Zaius, and his respect for science, or facts, or lack thereof. The scientist, Zira, is constantly belittled for her theory that humans could once speak, and ruled the planet. Any resemblance to our new leader, President Trump, who refuses to accept science, or intelligence briefings, or Russian hacking, or videotapes of what he actually said, or vote counts, or generals, or state department experts, or budget economists, etc.? He also creates myths, like all 3 million illegal immigrants in California voted against him, which required the kids to vote also.  (The blond hair and orange complexion is purely coincidental.)

When Dr. Zaius is confronted with the fact that Heston can speak, and human artifacts, he tries to deny and erase the evidence. President-elect Trump constantly insults the press and particular reporters. He bars some from even his public rallies. He had not given a news conference in half a year. He has threatened to relax the news protection in libel laws. He constantly publicly accuses opponents of crimes, violating due process. These are all similar to the behavior of the ape leader.

Zika is arrested and tried by an odd jury of see no evil, hear no evil, and speak no evil.  This is like Trump’s appointment for Administrator of the EPA, Scott Pruitt, Oklahoma Attorney General, who sues the EPA on climate change, and is a climate science denier.

When humans try to leave, they are met with a type of wall of fear, the Forbidden Zone. The Planet of the Apes takes place in the US, but crossing out of the areas should lead to areas with normal human rights. 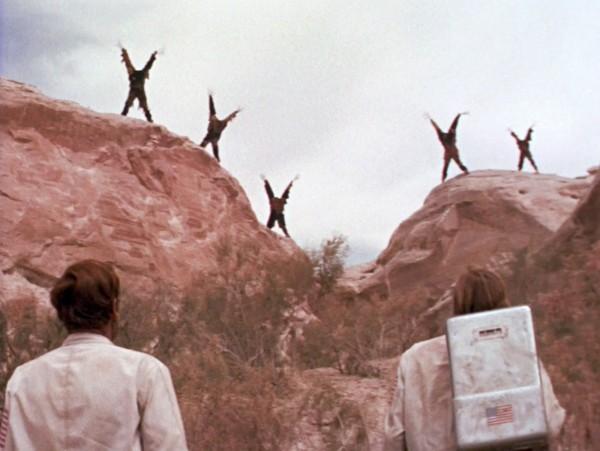 At the end, the apes are worshiping a terminal nuclear weapon. Trump and his appointed Secretary of the Department of Energy, Gov. Rick Perry, have actually desired to close the DOE. The DOE spends the larger part of its budget taking care of our nuclear arsenal. If the DOE is closed, the US really won’t have anybody who knows about the weapons. The last few days have been dominated by Trump’s off the cuff declarations about nuclear policy, without apparently consulting anybody.

Undoubtedly, with the new movie coming out, they will reshow the old movies on TV, and many viewers will notice the similarities in the original Planet of the Apes with Trump and his new anti-science, exploitive, and planet-damaging administration.

I am a retired Professor of Physics and Astronomy at U C Irvine. For a decade I have been active in learning about energy and the environment, and in lecturing and attending classes at the Osher Lifelong Learning Institute (OLLI) at UC Irvine.
View all posts by Dennis SILVERMAN →
This entry was posted in 2016 Election, Affairs of State, Climate Change, Donald Trump, Fossil Fuel Energy, Greenhouse Gas Emissions, Movie Analogies, Nuclear Weapons, Politics, Renewable Energy, Sea Level Rise, Trump Administration, Trump on Climate Change. Bookmark the permalink.